The Globe wins the most Canadian Online Publishing Awards 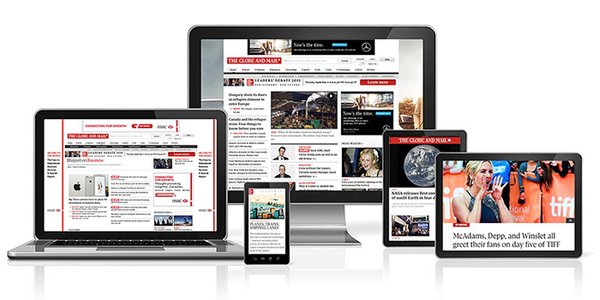 The Globe and Mail has been honoured with four gold and three silver prizes at the Canadian Online Publishing Awards for 2015, the most awards overall in Canada for a large media organization.

The Globe also won for best editorial packaging, for its treatment of a range of major stories and series including an investigation into the Canadian government’s treatment of thalidomide survivors; an indictment of solitary confinement rules told through the story of Eddie Snowshoe; and longform video storytelling in Saving Cyla and Kim’s Choice, among others.

In the category for Digital Content, The Globe’s editorial packaging for the same stories also won Best in Canada honours.

The Globe’s reporting on the Ottawa terrorist shooting won for best news coverage, while a feature by Patrick Martin, Michael Snider and Jeremy Agius on the web of alliances and enmities criss-crossing the Middle East took home the spot for best infographic/data visualization.‎ The three silver medals awarded to The Globe came in the categories for best video content; best website design; and best use of social media for Canada Q&A, a feature that allows readers to ask Globe journalists questions.

Last year, The Globe won four COPAs. The awards, handed out annually since 2009, are presented by Masthead Online, a trade publication.